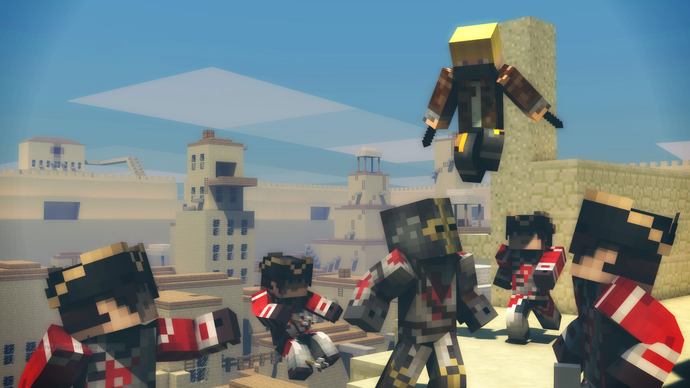 Rewas514 is a member of DLR and a YouTuber who uploads various gameplay videos, usually Minecraft.

He with other DLR members play various games, especially Minecraft, and upload his footage on his YouTube channel. He used to upload only machinimas and random videos on his channel, but after a few years, he decided to record his gameplay of Portal 2, GTA San Andreas and of course Minecraft.

Before coming up with a current name, he was known as COOLMAN12234555896. This name was created randomly and appeared first on his previous YouTube account.

Later, he came up with a new name Rewas514. The name Rewas comes from his last five letters of his surname..

Rewas' Minecraft skin is almost based on his appearance in real life. He has blond hair and orange eyes. His original skin has Assasin's clothes: white jacket with bandana, blue jeans and white shoes.

His Tekkit clothes are identical to the original except his jacket is replaced with a coat.

Since May 10, 2013, Rewas changed his skin to an improved one. Now he has a backpack, a blue jacket and doesn't have a hood anymore.

At the release of Minecraft version 1.8, Rewas changed his skin completely. His hair has been remodeled, showing a new style of blond hair. Unlike previous skin, he changed his eye color to Amethyst, a shade of violet. He wears a modern, brown, knee-length trench coat, the very same one that Aiden Pearce from a video game Watch Dogs wears. He also wears darker jeans than before Thanks to 1.8 version of Minecraft, Rewas can remove his coat completely. Underneath the coat, he wears a white sweater.

During this skin's debut, he didn't wear a bandana, unlike his previous skins, but he appeared with a small black bandana. Now he currently wears an improved version of his black bandana.

For all appearances, see Rewas514/Appearances.

Attack of the B-Team

Rewas uses all of the weapons that are in Minecraft. His favorite weapon is a Diamond sword, since it's the most powerful weapon in the game. He also likes to use bow and arrows to shoot mobs. When there's a chance, he likes to use an Invisiblity potion to make himself invisible and scare others.

Retrieved from "https://dlr.fandom.com/wiki/Rewas514?oldid=7917"
Community content is available under CC-BY-SA unless otherwise noted.