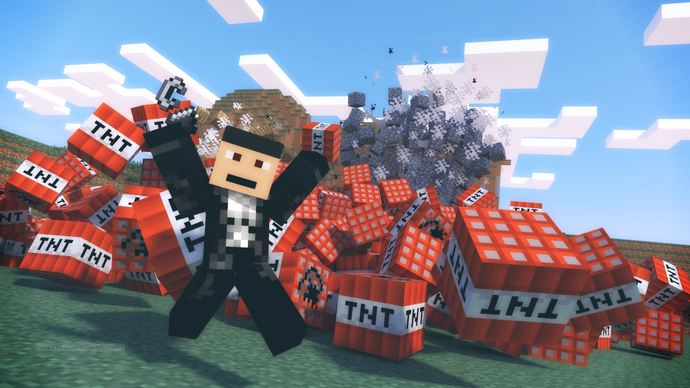 For the articles with the same name, see Tekkit.

Tekkit is a series created by LnDProductions. The series take place in a Minecraft modification called Tekkit.

A sequel of the series called Tekkit 2 is planned appear this Fall.

LnDProductions decided to start a new peaceful life in Tekkit. He wanted to built as many machines as possible. The more he built, the more people decided to join his life, but then something bad happends and LnD's peaceful life ends.

The start of the series. Surviving and building, LnDProductions struggles in getting all the stuff done and getting himself in a safe place, because he knows the evil within Tekkit.

A new era has begun as more people entered the world of Tekkit. LnDProductions meets the first citizen - Doublepulse, building his own factory. They both help each other out in doing some industrial work. Later on, more people have arrived! Rewas514, Darkseller63 and Jbadboy. They all have formed a town, the Tekkit Town. With a lab underneath and houses and factories around, they were going to live an industrial life... until one day.

The start of the new life, homeless and starving, LnDProductions is lost. With Doublepulse running the Tekkit town, it's now Evilpulse Town and every citizen of it have split. Except for Jbadboy, he's working for Doublepulse and he is planning for dominating the world, making explosions everywhere. Darkseller63 disappeared somewhere, while Rewas514 is going to help LnDProductions to defeat Doublepulse.

After being captured, after losing a friend and a home... LnD is trapped in the new Prison in the Nether controlled by Jbadboy. But he is not alone, Darkseller63 is there as his company. The two must find a way out and finally defeat Doublepulse.

Bonus Episode of Tekkit. What happens when we all come from different dimensions into one place - The Moon?

Retrieved from "https://dlr.fandom.com/wiki/Tekkit_series?oldid=7982"
Community content is available under CC-BY-SA unless otherwise noted.